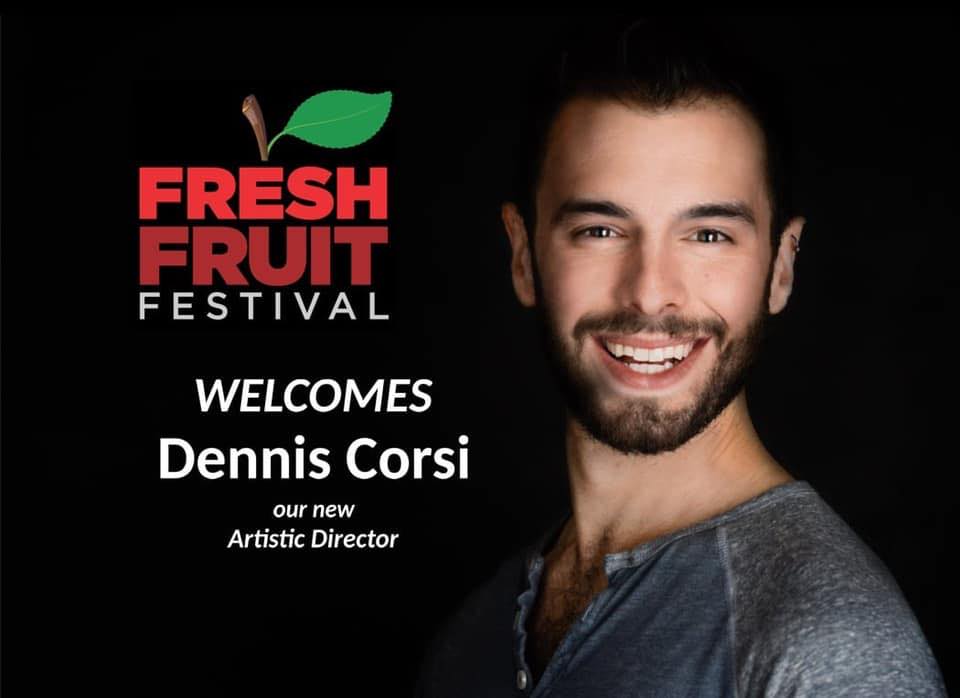 Dennis Corsi, BFA Acting and BA Media Arts & Technology 2013, recently was named the new Artistic Director of the Fresh Fruit Festival. Over the past 18 years, this festival has become one of New York City’s most visible and acclaimed LGBTQ arts organizations, elevating the quality, diversity, and inclusivity of queer theatre, poetry, comedy, music, dance, film, and other artistic expressions. Learn more about Corsi, his time at MSU, and his plans for the festival in the following Q&A.

What are the responsibilities of your new position with the Fresh Fruit Festival?

My primary responsibility as Artistic Director is to curate the festival. We receive 100-200 submissions, of which I have to select around 12. In addition to considering quality, I also need to consider diversity and inclusion in the pieces to be sure that we are giving voice to many perspectives in the queer community.

It is also my responsibility to bolster public knowledge and opinion of the festival so that we can attract more audiences and industry members who can shepherd the pieces or the creatives to future successes beyond the festival. One of my major priorities as Artistic Director is to make the Fresh Fruit Festival known as THE place to discover emerging queer talent.

We provide opportunities and support for queer artists and actively celebrate and foster diversity and inclusion. Much of this has to do with which shows we select. The past couple of weeks I have been putting together a team of readers to help guide me in evaluating submissions. I am making sure that the readers come with a wide range of backgrounds and experiences to ensure that we get the same diversity in the season we put on.

To increase diversity and inclusion, it is also important to provide financial support to artists who don’t come from wealth. Producing a show can be expensive. I am currently working on establishing a scholarship that we will be able to provide a queer artist in need in order to produce their show and tell their story in our festival.

Since graduating from Michigan State, what experiences have led you to this new role?

Two years in a row my team and I won the award for “Outstanding Production.” Both were plays written by a close collaborator of mine, Doug DeVita. I had a great experience at this festival because the leadership was so supportive and welcoming. I didn’t feel like just a number; I felt like they truly cared about our piece. That’s the kind of organization I want to be a part of.

How did your MSU education help prepare you for your career?

I had AMAZING teachers at MSU who were willing to go above and beyond to provide opportunities for ambitious students. In particular, Rob Roznowski and Kirk Domer were incredible support for me and encouraged me throughout my time in school and in the years since. You can get good acting training all over the place. But it’s rare to get educators who are so dedicated to their students and willing to push boundaries to create the best learning experiences possible.

Why did you choose to come to MSU?

I’ll be honest, MSU was not my first choice. But they offered me a full-ride scholarship, so I took it. And that was the best decision ever. Truly, I am so grateful that life brought me to Michigan State instead of any other school. I don’t think I would even be working in theatre if I didn’t go to MSU. The department was so open and welcoming to non-majors (I was originally enrolled as an engineering student and then premed). Rob Roznowski filled me with excitement for a future in theatre and made me believe something I never did before: that I could make it.

You can get good acting training all over the place. But it’s rare to get educators who are so dedicated to their students and willing to push boundaries to create the best learning experiences possible.

Did you have any internships and/or study away or abroad programs that influenced your career and/or life?

I did several internships, a study abroad, and a study away. Two of those experiences stand out. First was the Study Away in New York City program I did after my freshman year. I believe it was the first year of that program and has continued ever since. That experience is what convinced me to drop pre-med and put a greater focus toward theater. The second was the internship at Williamston Theatre. It is such an amazing opportunity as an undergrad to work in a professional equity theatre. It gives you a deeper understanding of how all of this will work in the real world. The partnership between the Williamston Theatre and MSU is an example of how the leadership of the theatre department reaches beyond the walls of the school to provide an excellent education for their students.

Did you have any mentors at MSU that you would like to mention and how did they help you in your career?

I’ve already mentioned Rob and Kirk, who were and still are wonderful mentors for me. But another impactful mentorship that began at MSU was with a guest artist, Devanad Janki. He was teaching and directing for a semester in my senior year and Rob set me up as his assistant director. Because of this, as soon as I moved to New York City, I had work. The week I arrived I already had a job assisting Dev on a hilarious musical, called We Three Lizas, at Joe’s Pub in The Public. Then in the years since, Dev and I built a theatre company together called Live & In Color. Through this company, we have developed six new musicals and five new plays, some of which have been optioned by Broadway producers or gone on to further productions around the world. I would not have gotten to where I am right now if it weren’t for meeting Dev while at MSU.

What should students take advantage of while they attend MSU?

More than they are. It was so easy for me to take advantage of the vast resources that the university had to offer because no one else was. As a student you have a magical pass. People are willing to help you and provide opportunities and resources to you that you will not find so easily in the outside world. But you have to seek them out. Talk to your advisor about what more you can be doing outside the classroom. Ask what scholarships and grants you can apply to so that you can explore a project that you want to work on. Ask who you can assist or shadow. Ask if there are alumni you can visit and connect with. Ask who you should know that you don’t yet. Go to the library and read and not just plays but books on leadership, creativity, marketing, psychology, history, etc. It’s just incredible how much is available to you as a student at MSU if you just ask for it.

What advice do you have for new graduates entering the workforce?

Don’t wait for all your ducks to be in a row. Just go where you want to be and figure it out when you’re there. Once you’ve moved to the place you want to live, start reaching out to alumni in the area. Ask what internships are available and who they should get connected to. If you’re an actor, start auditioning every day. It’ll start to feel like brushing your teeth.

Is there anything you’d like to add about MSU and your time on campus?

MSU offers free mental health visits. Take advantage of that. Being 17-22 is hard. Finding yourself and deciding who you want to be and how you want to interact in the world can be a mess. Everyone can benefit from talking to a mental health professional. You don’t have to be a “struggling artist” to make it as an actor. Take care of your mind and body and everything else will be easier.

Department of Theatre to Present ‘A Wrinkle in Time’