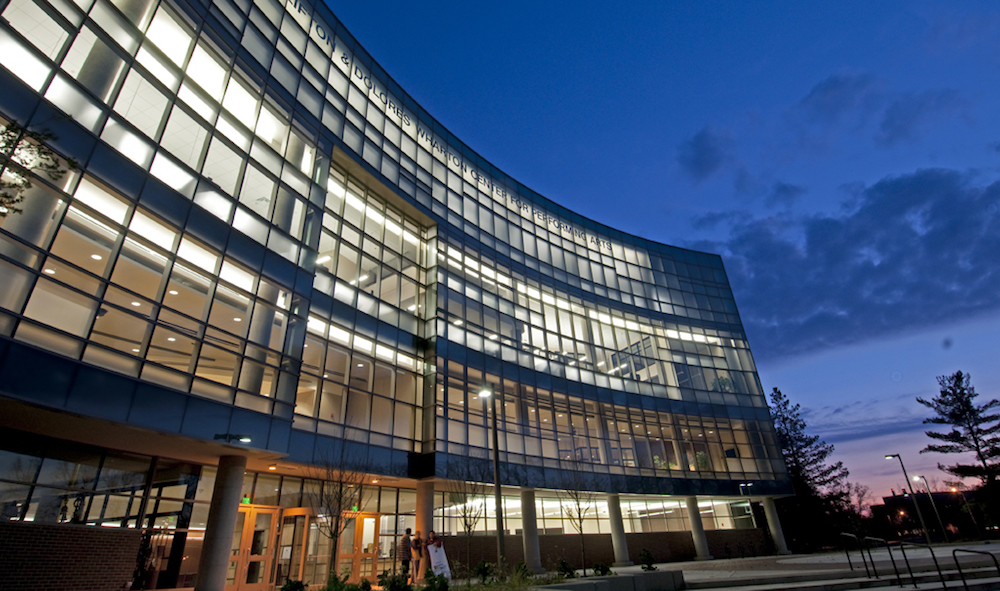 Exterior photographs of the newly expanded Wharton Center for the Performing Arts.

On September 21 and 22, a group of Broadway stars, Michigan State University Theatre students, and local high school students will present the results of an intense three-week workshop of a brand-new musical, Dr. Fox and the Impossible Cure for Death, as part of the ĭmáGen collaboration. These performances will mark the first time the show has ever been seen on stage anywhere in the world.

ĭmáGen is an annual collaboration between the Michigan State University Federal Credit Union (MSUFCU) Institute for Arts & Creativity at Wharton Center and MSU’s College of Arts and Letters’ Department of Theatre. Now in its sixth year, ĭmáGen is gaining national attention with the shows going on to be performed around the country. The program also is earning a reputation as one of the best places to develop a new show.

“There are hundreds of new musical development programs across the United States, but the extreme generosity of resources is what makes Michigan State University’s ĭmáGen program exceptional and unique,” said Benedict Braxton-Smith, guest composer and co-writer of Dr. Fox and the Impossible Cure for Death.

Dr. Fox and the Impossible Cure for Death follows a precocious 13-year-old girl and her overly imaginative father as they search a storybook world for a cure to a brain tumor in this very curious musical twist on the water of life myth.

Braxton-Smith and Megan Petersen developed the score and script as the culmination of their work in the New York University Graduate Musical Theatre Writing Program and then began submitting the show to be workshopped. This will be the first time they will see this work presented on stage.

“The opportunity to have this huge stage, a seven-piece orchestra, and a talented cast of students that were rehearsing and learning the music before we arrived…that’s not something you get with other workshops,” Petersen said. “Seeing it staged gives us new perspective on things like character motivation and messaging. It gives the show a beating heart.”

“Theatre is a collaborative artform and the students at Michigan State have such an incredible enthusiasm and curiosity to dive into the work,” Koch said. “Having a group of performers at different levels of perspective makes for a stronger show.”

Department of Theatre junior Carly Wilson says the speed of the process has been eye-opening and having the support of department faculty to take on the challenge has had a profound affect.

“I’m a musical-theatre minor and this experience is helping me find a confidence in my singing that I didn’t have before,” Wilson said. “On a personal and professional growth level, it’s been incredible.”

Apart from his role in the ensemble, junior Kevin Mazur also is understudying the Equity actor in the male lead. “I chose Michigan State, in part, for its musical theatre program,” he said, “but I never imagined I’d have the opportunity to be a part of developing a new musical, let alone the chance to add a professional understudy credit to my resume.”

The cast also includes high school students Emma Garrett (Olivet High School), Olivia Merand (Holt High School), and Emma Maki (Lumen Christi High School). The three young actors auditioned for the ĭmáGen program back in May as part of Wharton Center’s Take It from The Top program. For them, this experience has given them a sense of belonging in a world beyond home.

“Performing in high school theater, you’re always with the same group of people,” Garrett said. “ĭmáGen makes me feel like I’m part of a bigger community and makes me feel important.”

Performances for Dr. Fox and the Impossible Cure for Death will be on Saturday, September 21, at 7:30 p.m. and Sunday, September 22, at 2 p.m. Tickets are on sale now at Wharton Center’s official ticketing outlets: online at whartoncenter.com, at the Auto-Owners Insurance Ticket Office at Wharton Center, or by calling 1-800-WHARTON.