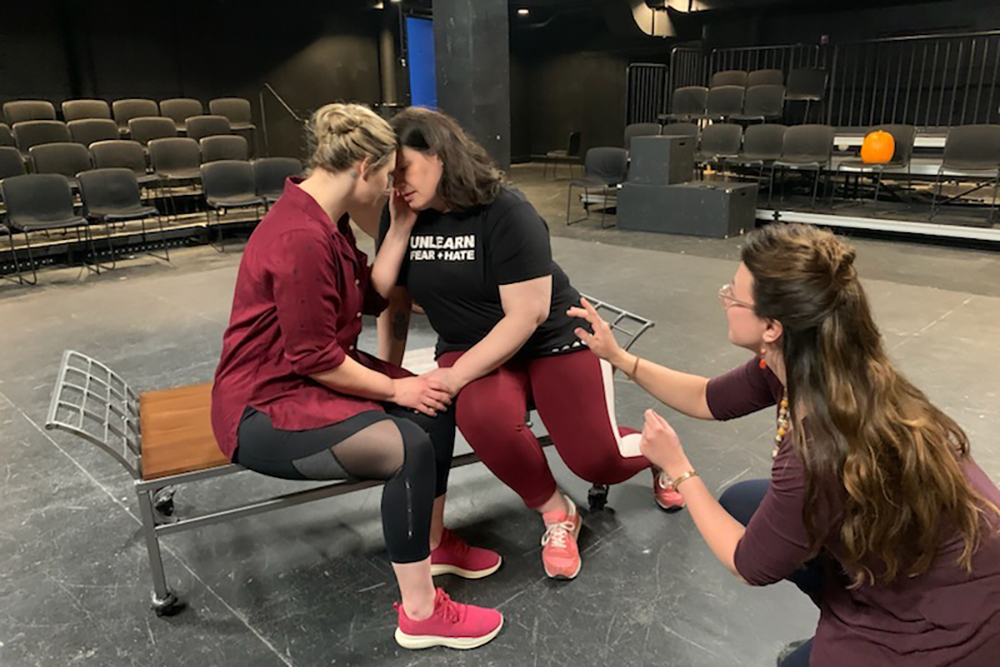 Alexis Black working with student actors on an intimate moment during Bonnets: How Ladies of Good Breeding Are Induced to Murder

In 2018, the Huffington Post described intimacy directing as “an emerging field in which a small group of professionals are pushing to develop standards and procedures for scenes involving physical intimacy in the wake of a public reckoning with sexual misconduct throughout the entertainment industry.” That same year, Michigan State University’s Department of Theatre hired Alexis Black as Assistant Professor of Acting and Movement, in part, because of her credentials in this field.

Today, Black is one of only 30 intimacy directors for theater in the United States, certified by Intimacy Directors International (IDI) and Intimacy Directors and Coordinators (IDC). She is one of only 10 certified intimacy directors employed full-time by a university and one of the two in the Midwest region. Black also works frequently with Redtwist Theatre, the only theatre company in Chicago to hire an intimacy director for a full year-in-residence. She places Michigan State University on the cutting-edge of this emerging field in the theater and entertainment industries.

An intimacy director is someone who is trained in telling a heightened physical story; similar to a fight choreographer doing a moment of staged violence. According to Black, those in the field of intimacy directing are working to develop industry protocol, standards and procedures, but the actual work itself is a movement direction specialty involving both choreography and advocacy.

Intimacy directors or IDs, as they are called by IDC and IDI, also support the psychological safety of the actors. While a lot of female-identifying actors feel empowered by the practices of intimacy direction, it’s also empowering for non-binary actors and actors going through transition. IDs also help male-identifying actors work with a character written as the predator or aggressor. The “pillars” of intimacy direction as taught by IDI are “Context, Consent, Communication, Choreography, and Closure.”

It’s wonderful that we have this opportunity at Michigan State to learn these new best practices and bring them into the professional world where they may not be in place yet. We can be advocates for change.”

This relatively new field of intimacy direction is especially important in the post-“Me Too” movement world because, Black says, it encourages actors to be confident that they’re working in a consensual, professional workplace; not only by respecting their own boundaries, but by creating much fuller communication with fellow performers around theirs.

“It gives an artistry and structure to these moments that has been lacking in traditional rehearsal settings,” Black said. “Directors might spend 15 minutes specifying the way you enter a room, or the way that you cross to a couch and sit down; but when they get to the intimacy, it is kind of, ‘oh, just figure it out.’ Intimacy direction makes that moment more of a sculpture, more part of the artistic process. It makes these moments of ‘physical text’ repeatable so that same story is being told from the first performance to the last.”

One of the first things Black did when she arrived at Michigan State University was collaborate with faculty member Tina Newhauser and her Advanced Stage Management class to build an MSU Movement and Safety Toolkit. The toolkit enables stage managers for all MSU productions to work from the same handbook in terms of psychological and physical safety for cast and crew. Black also credits Department of Theatre Chairperson Kirk Domer, Head of Acting Rob Roznowski, Production Manager Laura Scales, and more with supporting this work.

“Everyone is completely enthusiastic about it,” Black said. “The department has really risen to completely embracing this and I’ve heard from colleagues that this is not always the case at other universities.”

Having the opportunity to work with an intimacy director helped to eliminate fear and uncertainty for Sarah Davis (BFA Acting ’20) when she was cast as The Baker’s Wife in a production of Into the Woods. That fear, she says, was born out of a negative experience she had in theatre prior to attending MSU.

“My first kiss was a staged kiss and it was filmed in front of the entire cast and creative team to promote the show. Needless to say, that one-take wonder is a permanent reminder of the horror and dread I from then on associated with all theatrical intimacy,” Davis said. “With Alexis, we quite literally designed how all the intimate moments between me and the other actors would play out. It felt like choreography in a sense, but it was completely driven by character need. Alexis had an attention to detail and investment in the work that allowed us to learn, play, and establish a sense of artistic professionalism.”

According to Black, stage intimacy can be something as simple as prolonged eye-contact or as involved as a physical altercation.

Recent graduate, Heather Mahoney (BFA Acting and Social Relations and Policy ’20) had an interest in fight direction and attended the “Combat and Consent” workshops hosted by Black for students at MSU. It was there that she first learned of intimacy direction and how, in both worlds, consistency is a form of safety. She had the opportunity to work as Intimacy Captain on a several shows at MSU and also for a professional production at Williamston Theatre that had “violent intimacy” between actors.

“I shadowed Alexis, learning how to slowly incorporate intimacy. You might start with foreheads touching, instead of going straight to a kiss,” Mahoney said. “Here the work of consistency was critical because the choreography ensured the actor playing the victim was always in control and comfortable, while what was happening to the character was incredibly uncomfortable. We helped to make sure the actor was mentally separated from the assault happening to the character.”

Intimacy direction is a growing field that is becoming an industry standard in theatres and TV studios and film sets. Claire Wilcher, a second year MFA candidate in Acting with an interest in body diversity and compassion in theatre, says having Black on staff demonstrates how invested Michigan State University is in their students.

“Having Alexis as a resource has created not only a culture of care in our rehearsals and our productions, but also our classroom culture has really shifted. It demonstrates that it is a worthy use of time and brainpower to make everyone feel comfortable,” Wilcher said. “It sets a standard of behavior that a lot of times is really necessary. It’s wonderful that we have this opportunity at Michigan State to learn these new best practices and bring them into the professional world where they may not be in place yet. We can be advocates for change.”

A Conversation With Theatre and Romance & Classical Studies