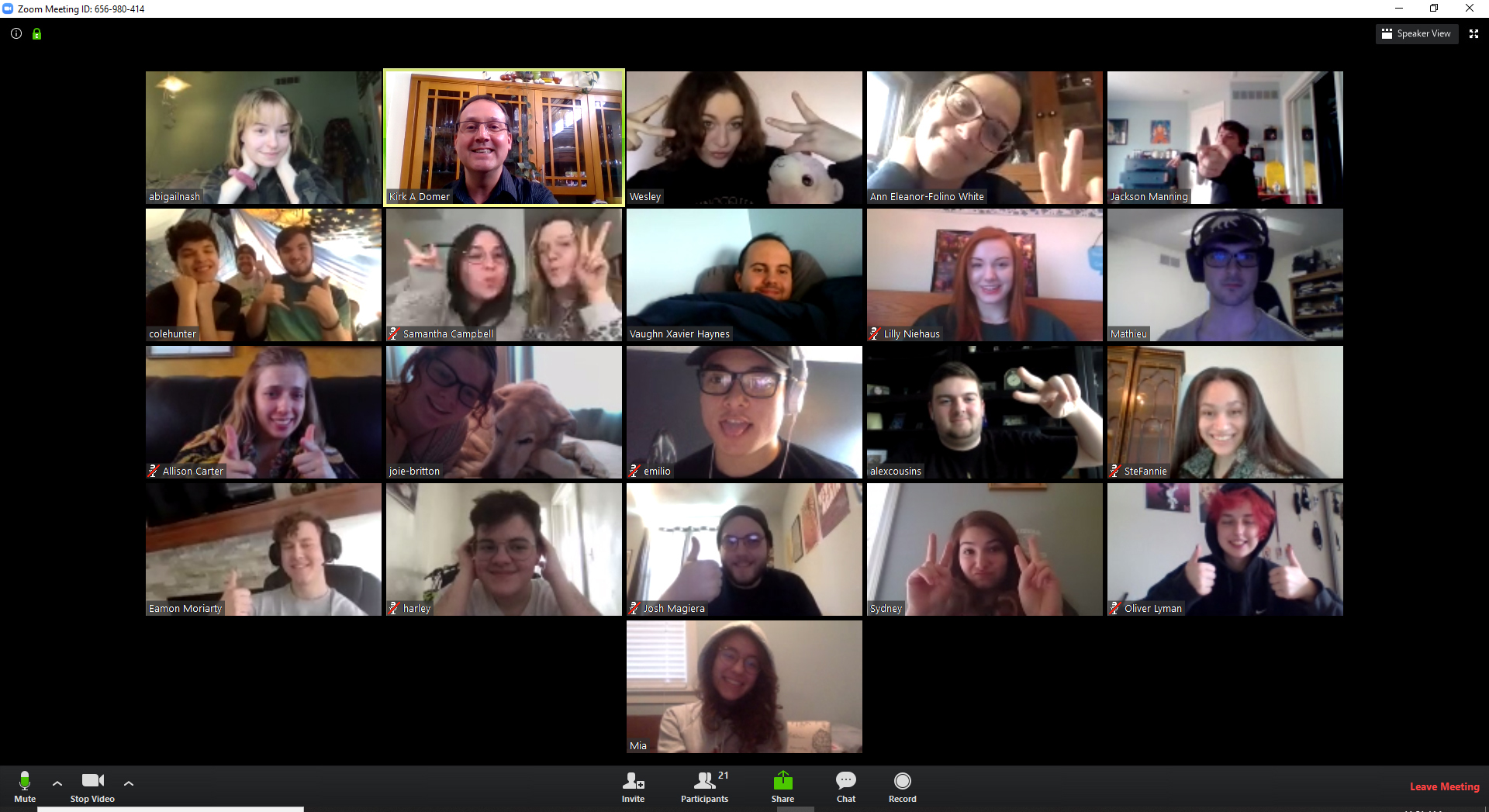 Sophomores in THR 292 Meet Remotely for the first time

On Thursday, March 12, Department of Theatre sophomores gathered for the course THR 292, also known as Sophomore Seminar. The class explores theatre making and its connections to non-theatrical contexts. What made this particular class session unique is that it took place just one day following MSU’s decision to move all face-to-face classes to remote teaching and for the first time students met in a virtual classroom using Zoom video conferencing.

Sophomore Seminar is a brand-new course this year in the Department of Theatre curriculum. Department Chairperson and Professor of Scene Design Kirk Domer, along with Associate Professor of Theatre Studies and Directing Ann Folino White, realized a need to instill a spirit of collaboration among students during their sophomore year, as well as a need to have conversations around what a career with a Theatre degree might look like.

Folino White, herself an MSU alumna, says she hopes the creation of this course will lead students to examine the role of theatre in contemporary society.

“We’re asking students to reflect on artistic theories that they are learning in design, acting, and production practicums,” Folino White said. “I hope what they take away from the experience is understanding that through their theatrical training, students not only gain a broadly applicable hard skill set, but key soft skills such as perceptiveness, alacrity, and mettle.”

A key component to the Sophomore Seminar syllabus is a Theatre Alumni Speaker Series. Each week, students have a chance to interact with graduates of the MSU Department of Theatre, working in both theatrical industries and “theatre adjacent” professions.

Earlier in the semester, students met Jaclyn Hofmann (MFA Acting ’09) who moved to Atlanta, Georgia, for an acting apprenticeship with the Atlanta Shakespeare Company and became a founding member of the Weird Sisters Theatre Project. She currently is an Assistant Professor of Theatre at Georgia Gwinnet College and continues to work as a freelance artist while raising her two children. Questions directed to Hofmann from the students included everything from “What kind of risks are you taking when you start a theatre company?” to “What are the challenges of starting a theatre career in a market smaller than New York, Chicago, or L.A.?”

Other guests in the impressive lineup of Theatre alumni speakers include everyone from Mikayla Bouchard (BFA Acting ‘11), an Assistant Editor for The New York Times, to Actor and Education Coordinator for Court Theatre Adia Alli (BA ‘14), to Zach English (BFA Design ‘12), an Associate Coordinator at Walt Disney Imagineering.

Lilly Niehaus, a student in the class, said the alumni series really proves that “there is so much you can do with a Theatre degree.”

When asked what their major takeaways from the alumni series had been, many students talked about the importance of relationship building, being an authentic and reliable employee, and the hustle that sometimes comes from creating the professional life you want for yourself.

Students also heard a message of resilience and the framing of a career as a journey.

According to Hofmann, in the professional world, their MSU degree alone is a calling card of reputation.

“I’ve spent a lot of time building a Spartan Atlanta Theatre Network because Spartans can be trusted to do an incredible job,” she said.

“Spartans can be trusted to do an incredible job.”

The Theatre Alumni Speaker Series is only one component to the seminar course. The course begins and ends with an artist self-reflection, in which students are asked what they want to be, and why and what they need to learn to become it. At semester’s end, they will revisit that statement and reflect on whether their answers have changed.

Another assignment is to create a list of their top five creative-adjacent jobs not directly aligned with the performing arts. For each position, students consider factors such as salary and availability in the city of their choice. They’ll also work in groups for a “Soup to Nuts Theatre Producing Project,” detailing everything needed to stage a full production of a play, from technical elements, space needs, personnel, marketing, and more. The collection of assignments aims to have students employ their theatrical skills and theatrical ways of thinking in a variety of contexts.

One of Domer’s favorite assignments has been the “2020 Performance Pitch” where students were asked to “package a happening” within the context of a performance piece. Suggested events included the 40th Anniversary of the Dr. Martin Luther King Jr. Commemoration at Michigan State University or the 150th Anniversary of women students attending MSU, but they also could propose alternative events. The added complication of the assignment is that each group picked a target audience from a hat, as well as an event location.

“Based on the creative ingenuity involved, I think my favorite pitch so far combined a circus and women’s center,” Domer said. “The project was entitled, ‘Circus to Success,’ and connected the New York Women’s Foundation with a circus surrounding the 100th Anniversary of the passage of the 19th Amendment to raise funds for a Women’s Success Center. This is just one of the many ingenious ideas coming from this assignment. Ann and I constantly text or email each other ‘B.C.E.’ Best Class Ever!”

The course also focuses on expanding the student experience while at Michigan State with an “MSU Bucket List” of 20 things the students will accomplish before they graduate. While likely not on any of their lists, given the shift from in-person to remote instruction, these Theatre sophomores could safely cross “learning resiliency in the face of adversity” off the list.

Check out all the amazing things the guest in our Theatre Alumni Speaker Series are doing:

An Open Letter from the MSU Department of Theatre