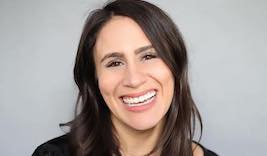 Executive producer, singer/songwriter, radio/red carpet host, actor, and soon-to-be podcast host of her own podcast — these are just a few of the titles held by College of Arts & Letters alumna Lauren LoGrasso, who graduated from Michigan State University in 2011 with a BFA in Theatre and a BA in Communications.

Soon after graduating, LoGrasso moved to Los Angeles to intern with The Ellen DeGeneres Show. She had sent her resume to a friend of a fellow MSU Theatre student who worked for the show and received a call from the Warner Brothers network shortly after. The next week, she moved to LA.

“MSU gave me a supportive community, they’re the reason I’m out here [in LA],” LoGrasso said.

LoGrasso’s experience with The Ellen DeGeneres Show taught her about the entertainment industry and the hard work involved in everyday efforts. The internship also allowed her to explore and discover other opportunities in LA.

After Ellen, LoGrasso began working her way into hosting, production, television, and podcasting, all while she continued to act, sing, and write and preform music and comedy sketches.

In 2015, she began working for Afterbuzz TV, Sirius XM Radio, and The Tomorrow Show with Keven Undergaro. At Afterbuzz, she worked as a producer and songwriter and still continues to work as a host. As part of her job, she has interviewed celebrity guests including DJ Khaled, Sharon Stone, and Aly Raisman. She still hosts at AfterBuzz TV today and can be seen hosting many red carpets and spotlight on interviews.

At Sirius XM, LoGrasso produced the show Conversations with Maria Menounos on SiriusXM Stars for which she she booked guests, wrote questions, press releases, promos, introductions, and social media content regarding the radio show. LoGrasso also interacted with Menounos each day as an on-air personality for the show.

I want to use my voice to make a difference in this world and make people feel less alone.

Right now, LoGrasso is working with her current employer, Cadence13, where she is the executive producer of female content, producing shows such as Girlboss Radio with Sophia Amoruso, Goop with Gwyneth Paltrow, and Jen Gotch is Okay…Sometimes, and Self Service with Jerico Mandybur. This summer, she will be hosting her own podcast with Cadence13 that is set to air later this summer or in early fall.

“I want to use my voice to make a difference in this world and make people feel less alone,” she said.

The idea for her podcast came from her desire to make those who are struggling in their 20s feel supported.

“Nobody tells you this, but your 20s are crazy,” LoGrasso said. “I was so naive coming out of college, and ever since my life has taken so many twists and turns. Sometimes you find yourself getting into different things, and the things I spend most of my time doing now are things that I did not and could not have planned for when I was younger.”

LoGrasso credits legendary journalist and broadcaster Mitch Albom with inspiring her to become a radio and podcast host. Last winter, when LoGrasso came back to the Detroit area for the holiday season, she was invited to be a guest co-host for a week on his WJR show, The Mitch Albom Show, for which she added a female millennial perspective into the conversations.

LoGrasso’s podcast isn’t the only thing she plans to launch this fall, she also has an extended play record (EP) that she’s writing and recording and will release in the fall.

In the future, LoGrasso hopes to record music videos and would like to get back into theatre and comedy. She even has plans to one day write a book.

When asked to share advice for MSU students, LoGrasso said, “do not be afraid to ask for what you want and deserve. Somebody may be able to help you get there.”

As an MSU student, LoGrasso was involved with MSU Telecasters, Impact student radio, the Department of Theatre, and much more.

“I came to MSU with the fear that its size would mean that I wouldn’t be able to differentiate myself or my experience there,” she said. “But because MSU is so big, you can make your experience whatever you want it to be.”

For more information on LoGrasso and her work, visit her website or LinkedIn.

Alumna Is the Creator and Voice Behind ‘Reba to the Rescue!’