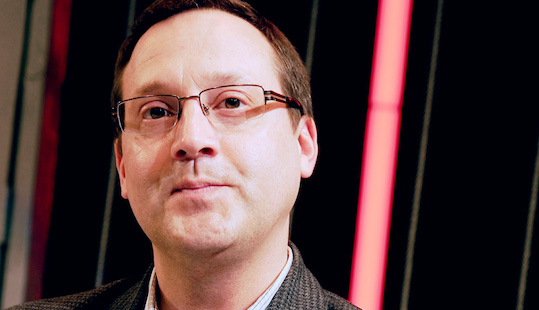 Kirk Domer has had many successes both at Michigan State University and in the professional theatre world.

Since he took the reins as Chairperson of the Department of Theatre in 2011 (and as Acting Chairperson in 2009-2010), the department has opened a 9,370-square-foot, state-of-the-art Scene Shop and a new courtyard for Summer Circle Theatre; the MSU Auditorium has been almost completely renovated; and several programs have been introduced, including the first linked BFA/MFA program at MSU, which began in 2012, and the recently launched Musical Theatre Immersion Program with Wharton Center that includes a new Musical Theatre Touring Company.

In addition to his responsibilities as Chairperson, Domer, a Professor of Scene Design, teaches design and technology classes, including the graduate seminar in production design. He also teaches the senior seminar, which prepares undergraduate Theatre students for their careers in the arts and beyond.

His teaching philosophy challenges his students to: “Do what I do. Challenge what I do. Do it better. Get a good job and hire me as a guest artist.”

Domer advises students to first follow his path, but to then “find your own voice within the work, and the best day is the day we disagree.”

To stay on the top of his game, Domer is continuously working on his craft. He has designed scenery, projections, and props throughout the country, including the world premiere of Ernie, a theatrical tribute to Detroit’s Ernie Harwell written by Mitch Albom, which has been running for the past seven years throughout the state of Michigan and Florida.

It is absolutely necessary, in so many ways, to continue doing your artwork while you are an art professor. I design constantly.

“It is absolutely necessary, in so many ways, to continue doing your artwork while you are an art professor. I design constantly,” Domer said.

In 2015, he was the first professor in MSU’s Department of Theatre to be accepted in to the United Scenic Artists Local 829 Union, a labor union and professional association of designers, artists, and craftspeople.

When working on a professional production, Domer often brings his students along with him as assistant designers to gain valuable experience. For instance, this past spring a student traveled with him to Houston, Texas, to help open the musical comedy, Five Course Love. More recently, a student worked alongside Domer on the Williamston Theatre’s production of 1984.

“Those added experiential learning opportunities are unbelievable,” Domer said. “It’s what I received when I was an undergrad, and it’s what I want to provide to my students.”

Those added experiential learning opportunities are unbelievable. It’s what I received when I was an undergrad, and it’s what I want to provide to my students.

Under Domer’s leadership, MSU Theatre students are learning within a diverse set of facilities on campus.

“With our new Scene Shop students work in a state-of-the-art facility, creating scenery to be presented at the Wharton Center, which is a Class ‘A’ roadhouse,” Domer said. “They have the opportunity to work with the best, the most exciting, the most cutting-edge facilities.”

At the same time, students also work in the basement of the MSU Auditorium without the latest technologies or a lot of amenities. This is done on purpose.

“They’re learning how to deal with lack of resources because let’s face it, that’s maybe how they’re going to start their career,” Domer said. “If we had state-of-the-art everything, students wouldn’t know what to do when they go out in the real world and find they don’t have enough power to light 10 instruments. That’s the biggest critique from the profession of universities to not teach all the state-of-the-art equipment because only universities and Broadway can keep up with that. You need to work with the resources that you are given. So we provide that at each and every level in the five different theatres we use; we always provide a different environmental challenge to work with.”

Domer was first drawn to theatre as a kindergartener when he performed as a toy soldier in a school play. He also grew up in his father’s woodshop outside their family home and would build things with his dad because he liked constructing and making things with his hands.

His defining design moment came as a college sophomore when his professor couldn’t take a job in San Francisco working for a touring circus company designing props. That professor and mentor (Kenneth Martin) recommended Domer for the job.

“That was revolutionary because I was learning on the job calling Ken who could fill me in on how to do things, and mounting a show that traveled throughout the state of California,” Domer said. “I learned so much about myself on how I work with others and how to create work that was inspired by the director. It was truly a fascinating experience.”