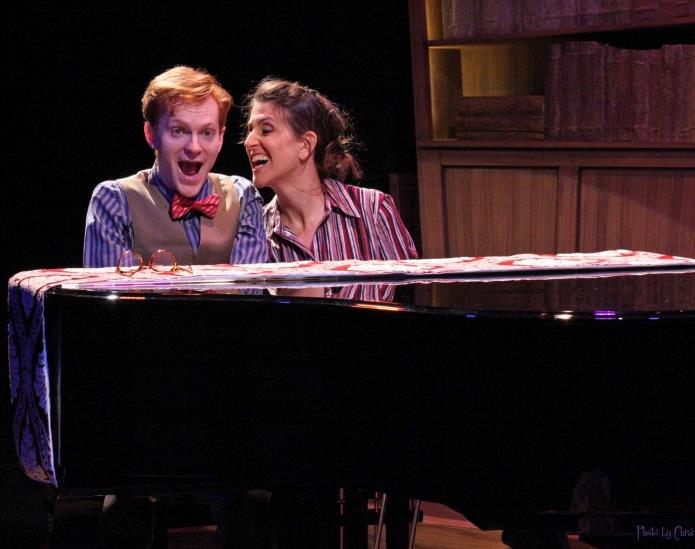 Schenfisch graduated from MSU in 2015 with two degrees: a BFA in Acting from the College of Arts & Letters and a BMUS in Music Composition from the College of Music. After graduation, he headed straight to New York City where  he focused on pursuing an acting career.

One of Schenfisch’s first  breaks  brought him back to Michigan to  understudy a lead role  in  Murder for Two  at the Farmers Alley Theatre  in Kalamazoo. The new musical comedy had successful runs in New York City and Chicago, but Farmers Alley was one of the first regional theatres to produce it. The show has a cast of just two men who play 13 roles  and  the piano, a part that Schenfisch’s two MSU degrees  perfectly prepared him to execute.

Throughout the rehearsal process, Schenfisch got to know the show’s composer and star, Joe Kinosian, who introduced him to a new network of composers and lyricists back in New York City. The new connections included BMI alumni and award-winning musical theatre writers Kerrigan and Lowdermilk, who hired Schenfisch as  Associate Music Director  for a show they were workshopping.

After my first acting class, I walked directly to the Department of Theatre office and enrolled as a double major with a B.A. in Theatre.

In  the summer of  2017, Schenfisch headed back to Michigan  for another run of  Murder for Two, this time to star in the  Williamston Theatre  production  directed by  Rob Roznowski, MSU  Department of Theatre Head of Acting and Directing.  During this time, Schenfisch  also was preparing to audition for the BMI Workshop, which is a workshop created in 1961 with the goal of instructing promising new generations of musical theatre writers in the craft of theatrical songwriting. Around 30 people per year join the program.

In the first year of the BMI Workshop, writers explore the fundamentals of writing musical theatre through a series of assignments. The second year is dedicated to writing a complete musical and only a limited number of writers are invited to continue to the Advanced Class, which offers the opportunity to receive tips and feedback from some of Broadway’s most renown writers such as Alan Menken (The Little Mermaid and Beauty and the Beast), Robert Lopez (The Book of Mormon and Frozen), and Lynn Ahrens (Ragtime and Once on the Island).

Alongside lyricist Sam Balzac, Schenfisch composed music for a joint presentation this past May, which served as the songwriting duo’s audition for the advanced workshop. They recently teamed up with book writer Allison Frasca (All Star: The Best Broadway Musical) and are currently writing a musical adaptation of a popular web series about video gamers.

When Schenfisch first arrived at MSU, he was a member of the Honors College and was majoring in music composition. He  added  Acting 101 to his course load  during his  first semester.

“After my first acting class, I walked directly to the Department of Theatre office and enrolled as a double major with a B.A. in Theatre,” he said. “It wasn’t until my senior year that I switched from the B.A. to the B.F.A. in Acting.”

Throughout Schenfisch’s career, Roznowski has remained a cheerleader and sounding board for him beyond graduation, helping him to navigate various career opportunities and difficult decisions.

“I chose Michigan State because there was an atmosphere of support across the entire university,” Schenfisch said. “It wasn’t about competition; it was a community of people coming together to make each other better.”

Schenfisch says professors Charles Ruggiero and Mark Sullivan  of the  College of Music  really helped  him “delve into the why” of music composition.  When conflicts in requirements for each major arose, faculty in both Music and Theatre worked closely with  him  to  provide  the  flexibility  he needed to complete all his coursework.

Currently, the biggest challenge for Schenfisch is figuring out how to create time in his life to  focus on both music composition and acting. He also works professionally as a voice-over actor and is currently voicing the main antagonist for the second season of Yu-gi-oh! VRAINS, the sixth TV series based on the popular Yu-gi-oh franchise.

“My advice to students is to use your time at Michigan State to diversify your skills,” Schenfisch said. “Take a music class. Take a dance class. Develop a foundation and a set of transferable, multidisciplinary skills. Then take advantage of that network to get a leg up as you start your professional career.”