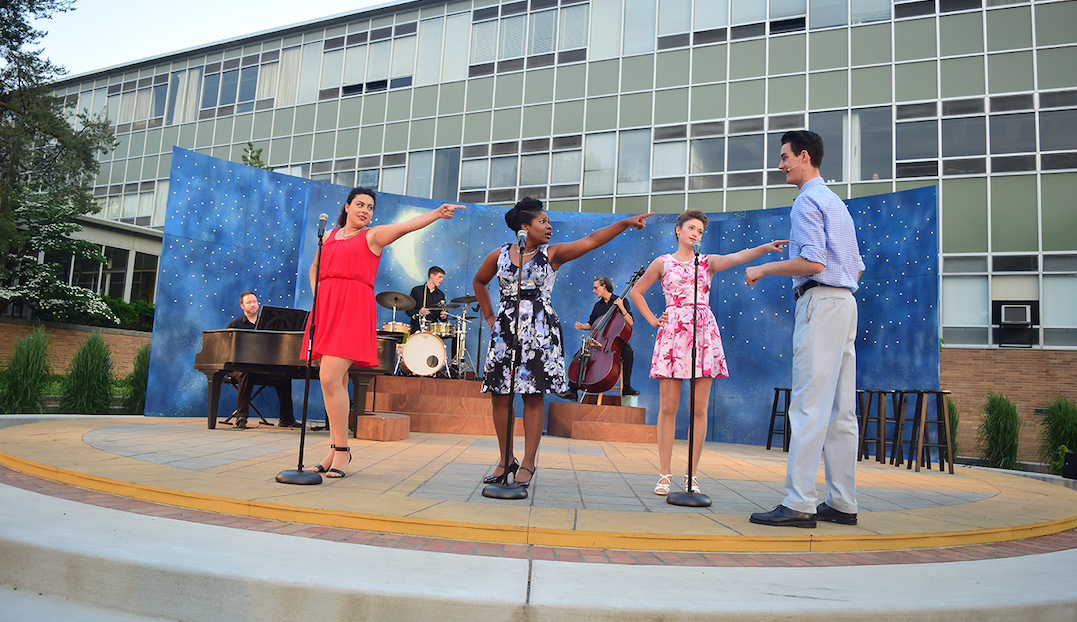 Since 1960, the Michigan State University Department of Theatre has heralded the unofficial start of summer with its Summer Circle Theatre (SCT) program by using the talents of MSU students, professional artists, and community members to offer free theatre to mid-Michigan audiences.

This year’s theme, Laughing Matters, is devoted to comedy in its many forms including spoof, comedy of manners, and commedia dell’arte. The season begins on Thursday, June 6, with One Man, Two Guvnors by Richard Bean, a modern version of a 1743 commedia dell’arte piece. The show follows the misfortunes of perpetually hungry Francis who suddenly finds himself employed by two separate bosses. Set in England during the 1960s, the 2011 premiere of this hilarious farce made James Corden a star. Performances are scheduled for June 6, 7, and 8 at 8 p.m. and June 9 at 4 p.m.

Summer Circle’s second weekend features the classic Oscar Wilde story, The Importance of Being Earnest, as adapted and directed by MSU dramaturg and theatre historian, Daniel T. Smith, Assistant Professor of Theatre. When Jack and Algernon invent alter egos named “Ernest,” hijinks ensue. This classic comedy of manners satirizes the Victorian era, especially through one of the most famous characters in the theatrical lexicon – Lady Bracknell. Performances are June 13, 14, and 15 at 8 p.m. and June 16 at 4 p.m.

Summer Circle 2019 goes out with a bang, or rather a tap, with the campy musical spoof, Dames at Sea. This zany homage to movie musicals of the 1930s is a tap-dancing delight. When aspiring Broadway chorus girl Ruby meets songwriting sailor Dick, love sets sail. With book and lyrics by George Haimsohn and Robin Miller and music by Jim Wise, the show is a perfect night out for the whole family. Performances are June 20, 21, and 22 at 8 p.m. and June 23 at 4 p.m. In 1989, Dames at Sea was the show that launched Lansing’s Riverwalk Theatre and the SCT performance on Saturday, June 22, will include a cast reunion.

In addition to the three main-stage productions, Summer Circle Theatre includes a variety of pre- show entertainment including chair yoga lead by the MSU Health 4U Fresh Air Fitness program; performances by Dance Lansing; the premiere of the kid-friendly show, Comic Timing, by MSU Head of Acting and Directing Rob Roznowski on June 7-8 and 14-15; and the culminating performance of the SCT Kids Camp on Friday, June 21, at 6:30 p.m.

This season we invite you to turn off the news, kick back, and enjoy the summer with us. Because laughing matters.

The Summer Circle stage is an outdoor performance venue located on MSU’s campus between the Kresge Art Building and the MSU Auditorium. Free parking is available across the street. In the event of rain, the performances will be moved into the Fairchild Theatre.

All performances are free and open to the public. Theatregoers can arrive early to grab a Summer Circle seat next to the stage or bring their own chairs for casual lawn seating. Attendees are encouraged to bring a picnic to enjoy during the show or buy a Food Truck treat.

One Man, Two Guvnors (Appropriate for ages 13 and up)

Comic Timing (Appropriate for all ages)

The Importance of Being Earnest (Appropriate for all ages)​​​​​​​

For a complete description of each show, visit theatre.msu.edu.

See you at the circle!