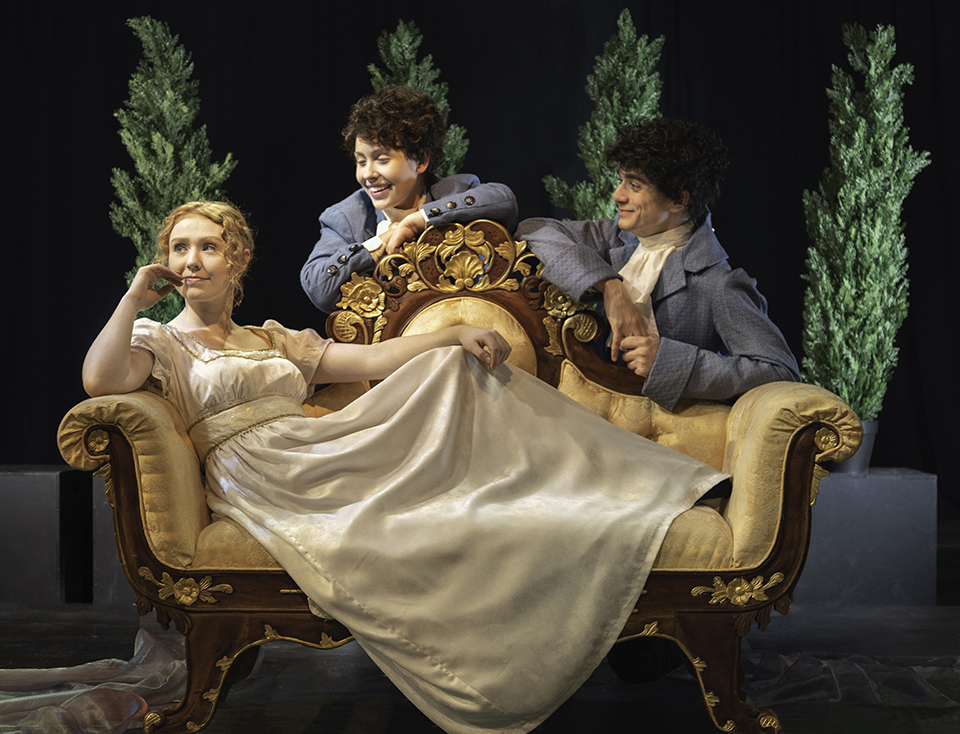 Jamie Lien as Olivia, Isa Rodriguez as Viola, and Brandon Drap as Sebastian on the set of Twelfth Night. Photo credit: Charles Benoit

Kaikkonen directed, acted in, or wrote more than a dozen BoarsHead Theater shows, including three separate productions of his play Time Steps. The BoarsHead Theater was mid-Michigan’s oldest professional resident theatre until it closed in 2010 after 43 years of business.

For the past 25 years, Kaikkonen has served as Artistic Director of Peterborough Players in New Hampshire. His prolific career also includes being in the original Broadway cast of Equus, and most recently, directing a New York production of Hindle Wakes, which was nominated for Outstanding Revival by both the 2018 Drama Desk Awards and the Off Broadway Alliance.

I’m very impressed by the student talent and hope to instill in them an ear to interpret and articulate the work.

Known as one of Shakespeare’s classic comedies, Twelfth Night explores themes of gender confusion. A girl, Viola, disguises herself as male to be near the man she loves, only to be pursued by the woman that he loves. The result is a madcap tale of mistaken identities and misplaced affections.

“Shakespeare wrote really strong female roles in a time and medium that was inherently misogynistic. Yet, he wrote with a discipline and awareness that isn’t making fun of anyone,” Kaikkonen said. “He was adept at holding a mirror up to society. The characters of Olivia and Viola are finding their own way and are not interested in doing what the men in the play want them to do.”

Kaikkonen’s concept for the production is simple: “We want the audience to understand the story. In directing the show, I’m not trying to find the best Viola, for example. I’m trying to find the actor’s best interpretation of that character. What will make the play unique is the fact that this specific actor is playing that character and that will make it different from any other production. I work to see who my cast are going to be and try to encourage those behaviors in those characters.”

In addition to his role as guest director, Kaikkonen also is instructing MSU students in a classical acting course.

“I’m very impressed by the student talent and hope to instill in them an ear to interpret and articulate the work,” he said. “The pentameter is their friend. It breaks the text up into little chunks that are easier to understand. It sets up a rhythm and, in that way, it’s like rap music.”

Twelfth Night runs for 10 performances November 8-17 in the MSU Auditorium building Arena Theatre. Tickets are $15 for general admission, $13 for seniors and MSU faculty/staff, $10 for MSU students. Tickets are available online at whartoncenter.com, at the Wharton Center box office, or by calling 1-800-WHARTON.

Department of Theatre to Present ‘A Wrinkle in Time’

MSU Department of Theatre Students Get Creative During COVID-19